Saturday... Long way to go, and a short time to get there.

Still some fabrication work to do, not to mention final assembly and testing... This being the last day of the workshop, it was rather busy. 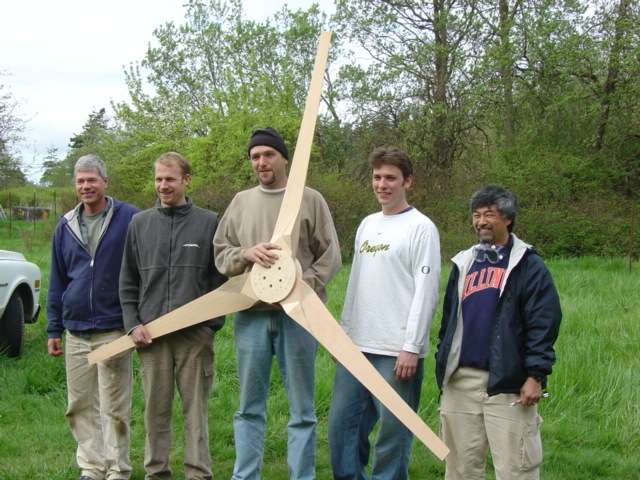 A finished 8' diameter prop. David Lochtefeld, Lâl Maranin, Darin Bird, Mathias Craig and Humphrey Wong pose for the picture. Lâl, Darin, Mathias, and now Humphrey all work with Blue Energy, it was a pleasure to work with and get to know them. These folks spent a lot of time on the finished windmill blade, and they are justifiably proud of thier work... 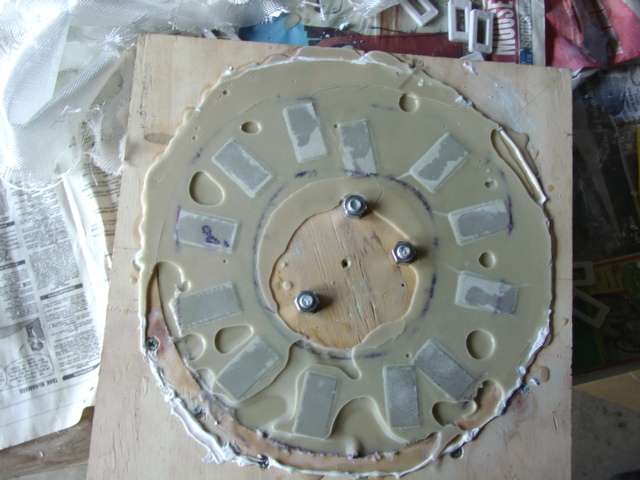 Here we get into the previously mentioned troubles with Hal's rotors. They have been cast, the resin harnded, and as can be seen, one magnet at the 12:00 postition, and two near the 5:00 area had slipped out of place before the resin set up. Prior to fixing the magnets to the steel disks, we brushed on a layer of fiberglass resin to hold the magnets in place. The problem is that we didn't give that layer of resin time to set up, so when the mold covers were placed on top, the magnets slid about on the slippery wet resin surface when the steel clamps were applied. Plans now call for allowing time for that first layer of resin to set up before fully casting the rotor... or using "super" glue to hold the magnets in place. 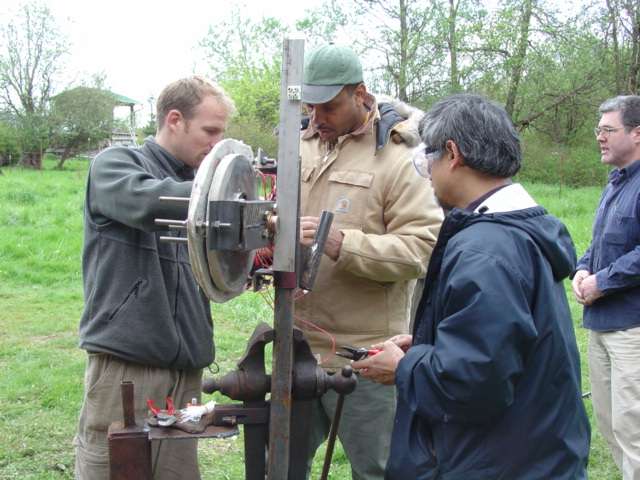 Outside, folks were working on wiring... I should also mention that Brian was the expert volunteer in the electical department. He is seen overlooking the situation from the far right side of this picture. As with the other volunteers, he is a kind and patient man... 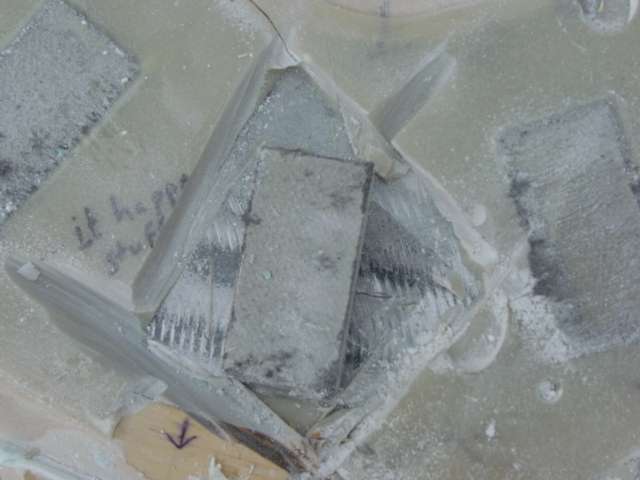 And Hal went straight to work on an innovative fix to his rotor problems. He cut out the offending magnets by grinding the hardened resin, cleaned up the magnets, and replaced them in the proper orientation... 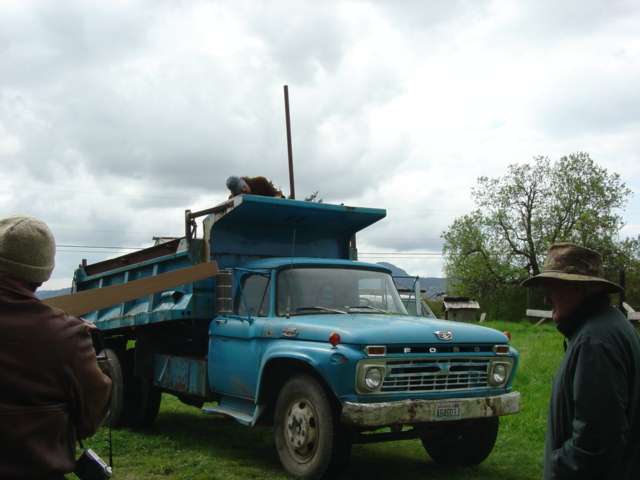 And somewhere else outside, folks are working on a temporaty stand atop the dump truck for testing... If the wind ain't blowing, one can simulate wind with a dump truck. A windmill atop a dumptruck travelling 20mph is exposed to a ~20mph wind. Clever and fun to watch. 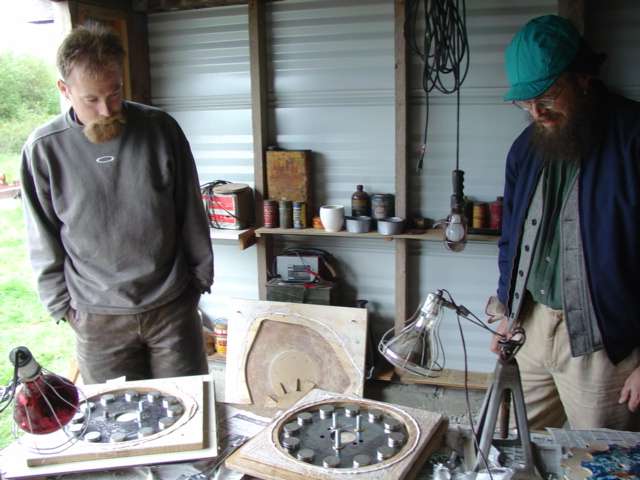 This is yet an entirely different project. Mike, seen at the right... another local volunteer, was the recipient of a windmill from a previous years seminar, and needed to cast new rotors for his windmill. His uses round magnets rather than rectangles same idea though. 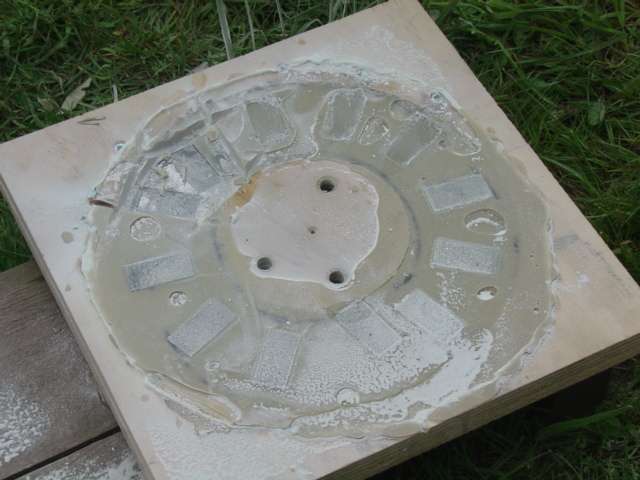 Back to Hal's repairs... here you see where two offending magnets have been removed. 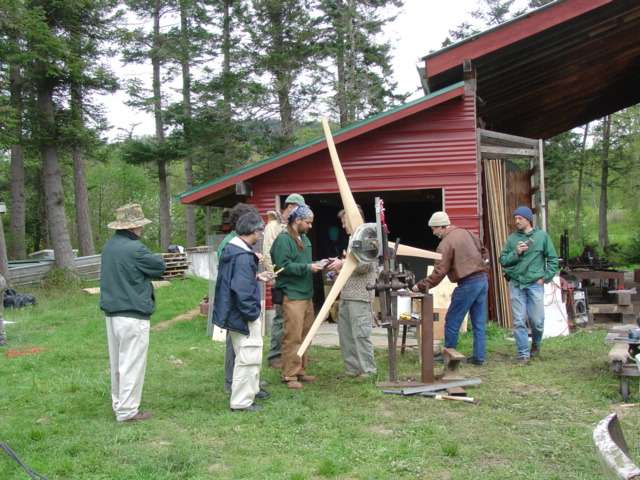 Outside again, the blades are installed on the 8" mill... about ready to be balanced. 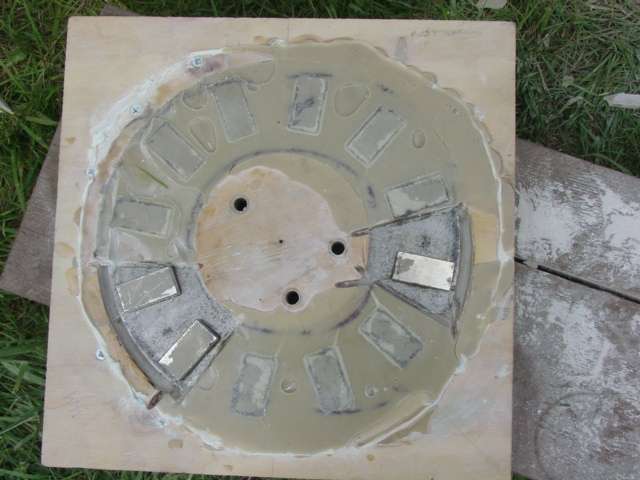 Back to Hal's project again... magnets have been replaced in their proper places. This time we let the first coat of resin set up, and we'll re-cast just those areas later. 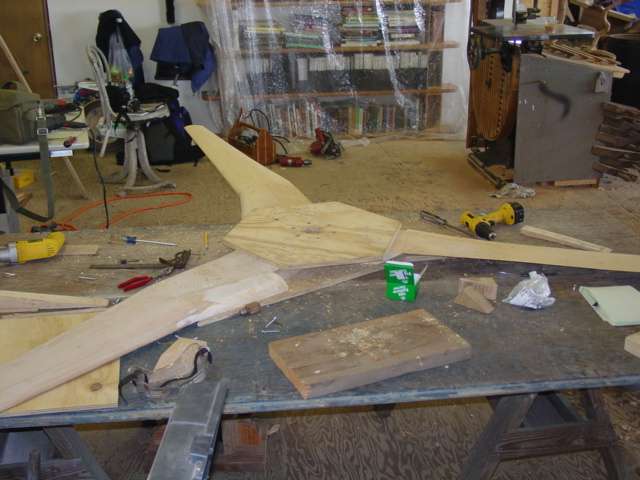 Inside the woodshop, the blades for the 12" windmill are getting ready for assembly. 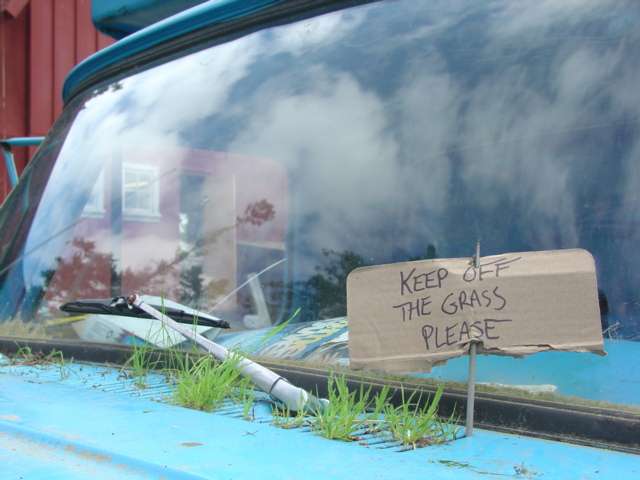 Plenty of work to do, but we did have fun of course. Grass grows everywhere on Guemes island. Including the air vents of the designated windmill testing dumptruck. 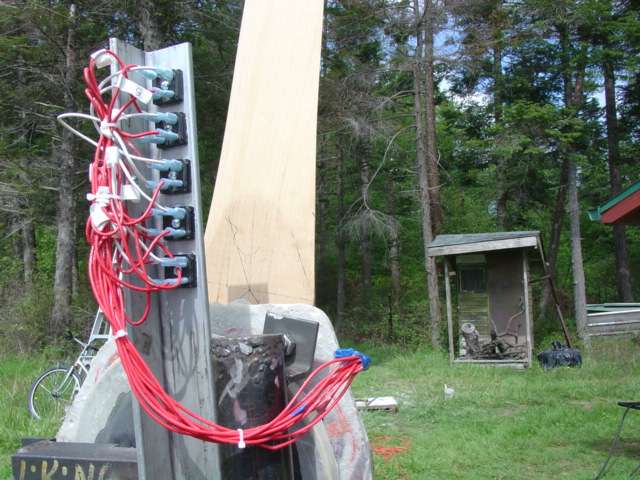 Black box... the wiring from the stator to the bridge rectifiers. 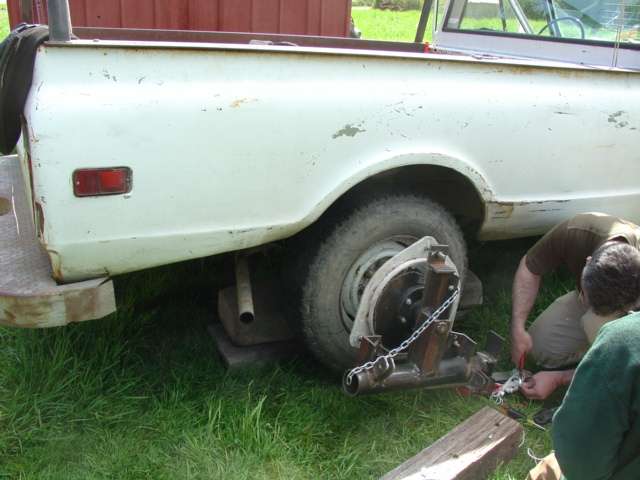 The 12' machine has, of course, a 12' diameter propeller... a bit large for mounting atop the dumptruck. So it was decided to mount it to the rear wheel of a pickup for accurate testing of output at various RPMs. 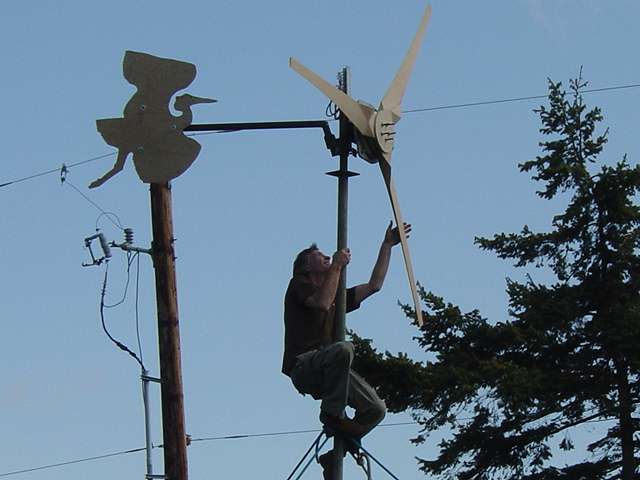 The smaller 8' windmill is done, and mounted on a temporary tower... Hugh then climbs said tower, points the machine in the direction of the wind, and gives it a quick spin to help get it going. Of course, that isn't necessary... just fun to watch. 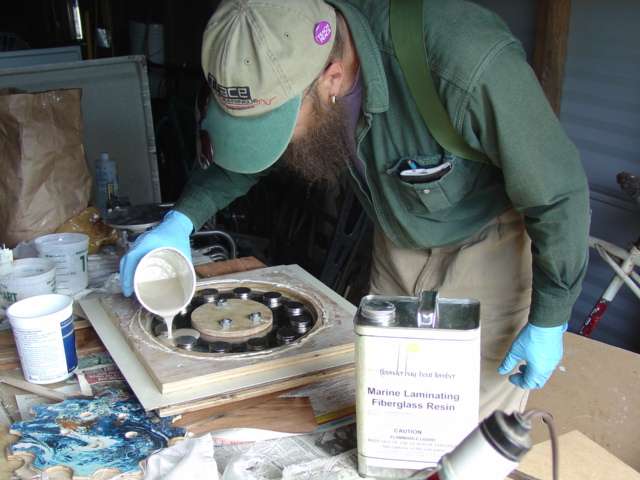 Back in the casting area, Mike starts to pour resin around his new rotors. 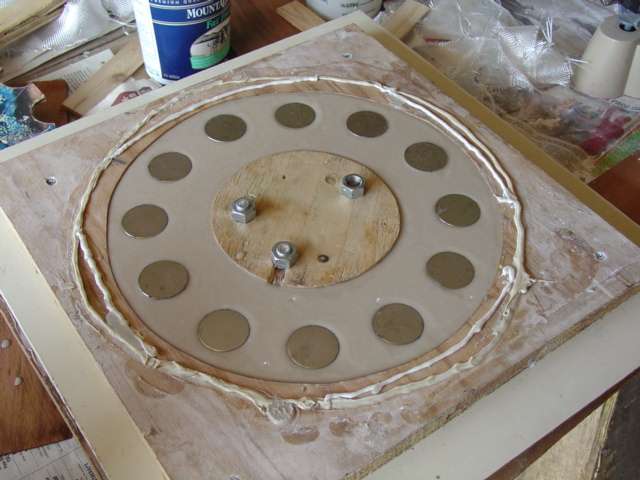 This is as far as he is going to go... we're guessing that the magnets will be tight enough with nothing covering them. The magnets are nickel plated, so there shouldn't be a problem with corrosion. 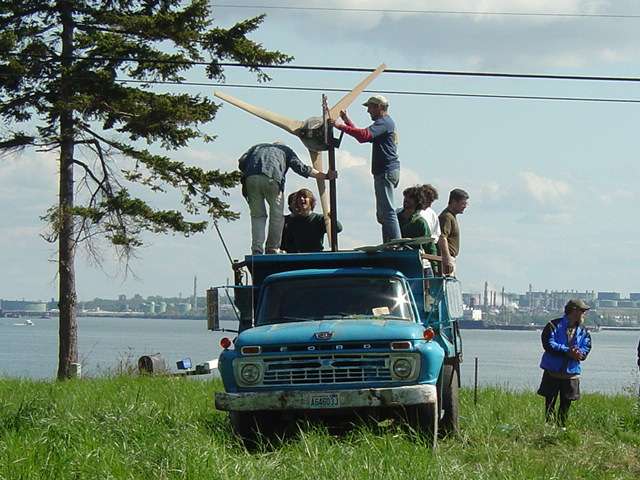 Back outside... still working on the dump truck test apparatus. 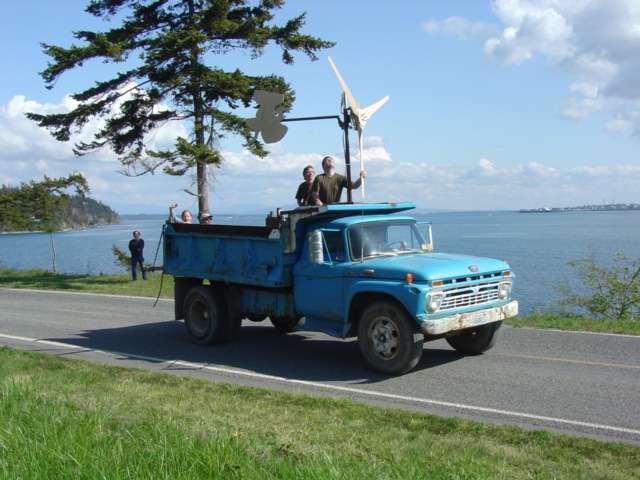 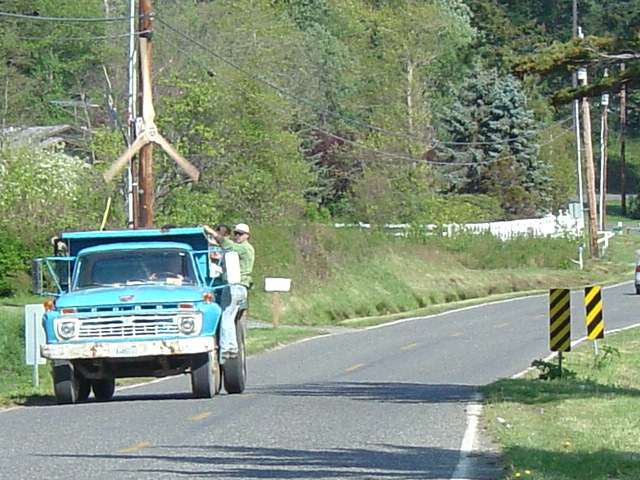 And here it is in action. 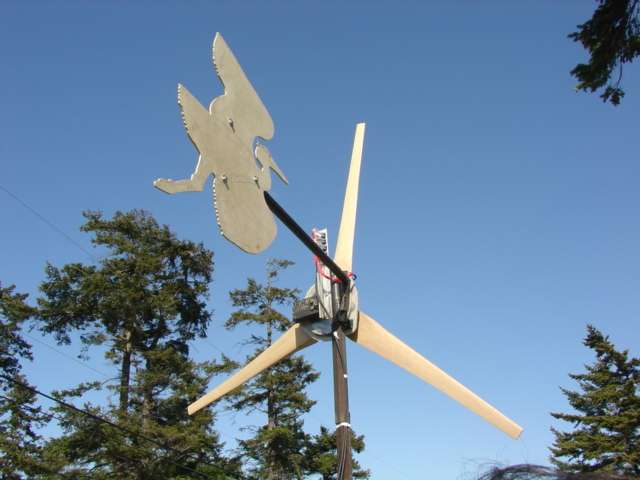 This is the view from the bed of the truck... rides back there were most entertaining... 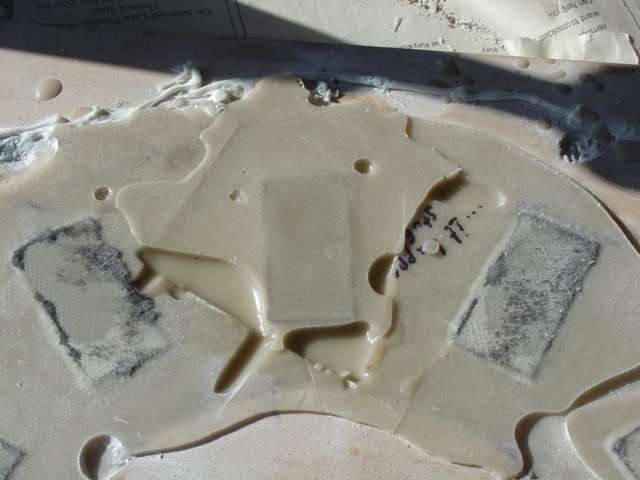 Here we are back to Hal's project... this being the final result of the repair. We cut fiberglass mesh pieces to fit the areas of repair, poured resin in, put the lids back on the molds, and all came out fine. The rotors might have weak spots for these issues, but I sorta doubt it. Only time will tell. 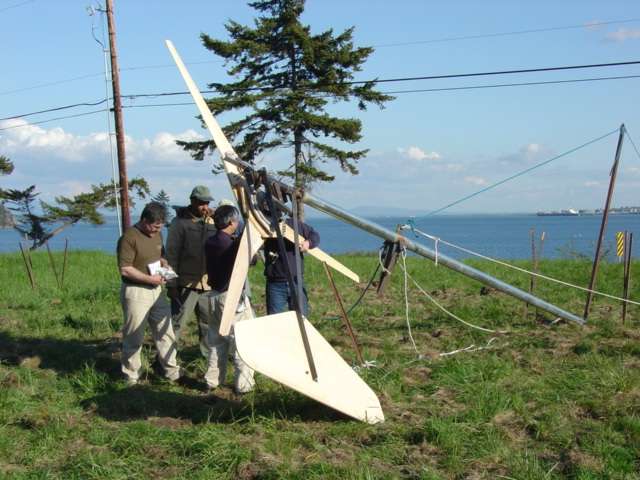 After testing the large alternatorat the wheel of the pickup truck, it came to raise it on its temporary tower... here preparations are being made... 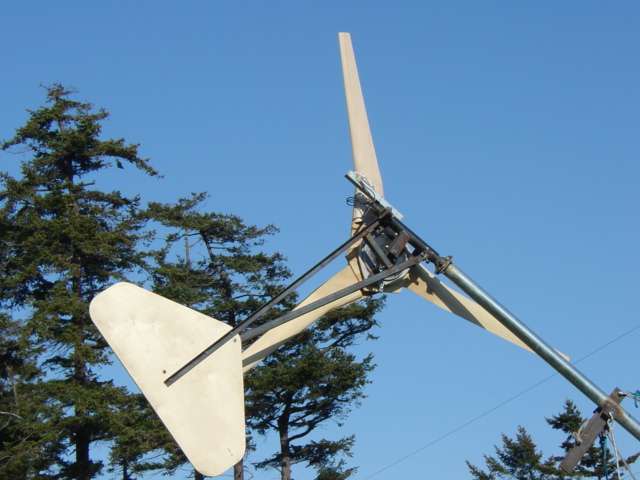 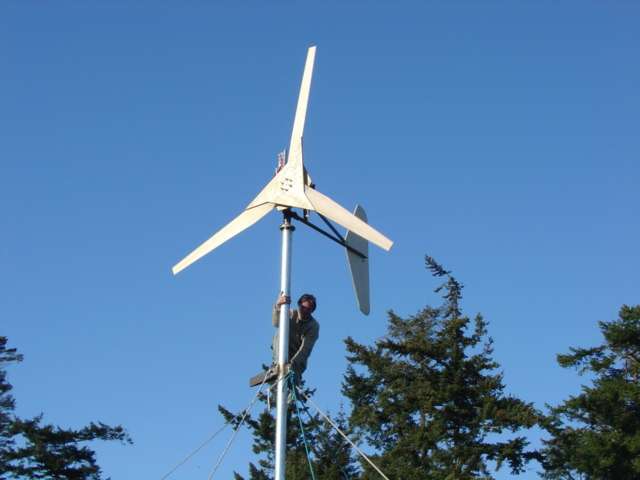 Here it is up in the air... Hugh of course had to climb the tower and give 'er a boost... That's about it for the seminar itself... it was absolutely a great time with great folks. I can't think of a more fun and productive way to spend a week away from home. 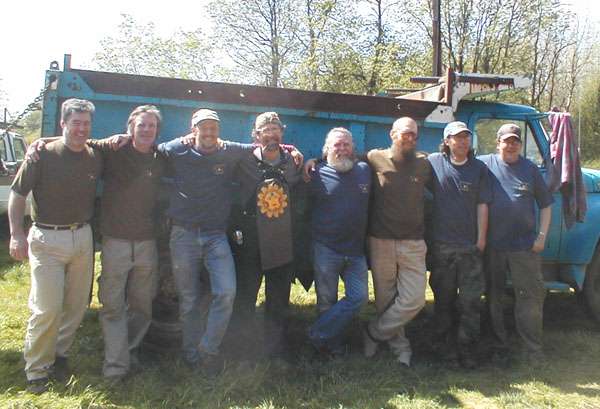 This is picture of all the volunteers and instuctors... from left to right, there is Brian (electics fella), Hugh (we know him), Ian (put the whole thing together..thanks!), Andy (metalworks instructor), BJ (wood instructor), Mike (bits gatherer, wisher of good will, and general assistant), and on the far right are the Dans.. DanB, and DanF. general helpers and advice. 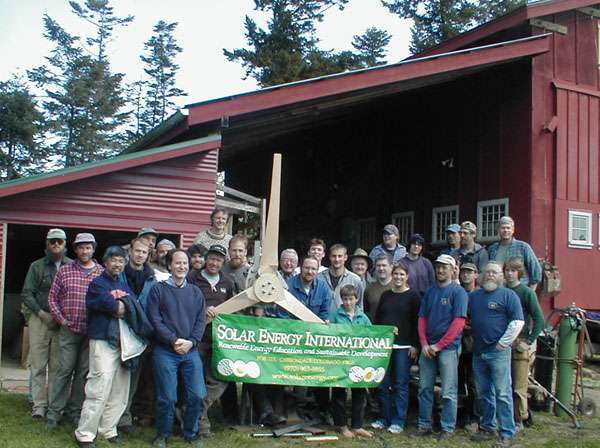 This is the lot of us... attendees, volunteers, instructors... we're all pictured here somewhere... A good time was had by all.

There are a couple other pages of pictures to follow that are not related to the seminar itself... the first being gatherings and live music that happened almost every night at cabin #6, and the second page of our visit with friends in Portland, and a little bit of the drive home.

Click Here to get back to the front page.

Click Here to move on to unrelated pictures taken after hours.