para Español This is 'page 4' of the project. The goal was to build a simple 17' wind turbine, basicly a scaled up version of earlier machines we've built which are very much inspired by Hugh Piggotts 'Axial Flux' wind turbine plans. The previous 3 pages detail some of the construction of the machine. This page will talk about finishing up, raising the tower and wiring it in.

And, be sure to check out our book Homebrew Wind Power -- it has all the information you need to build this turbine. 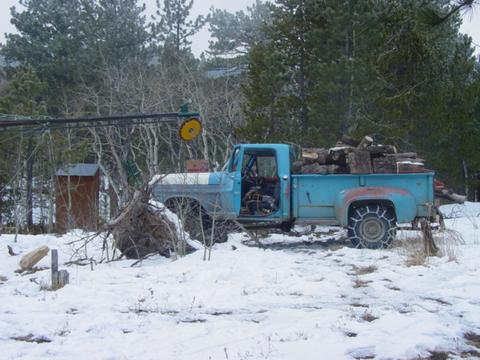 The first step is to get the machine up on the tower. It's a simple arrangement--the tower top has a stub of 2 1/2" pipe, with a thick flat 'washer' welded on the end. There is a plastic bushing on top of that, and then the machine simply slips over the top of the tower and rests on the plastic bushing. The wire goes straight through the tower, up through a hole in the wind turbine, so as the machine turns the wire can twist. At the bottom of the tower there is a heavy 3 prong locking plug that we can unplug to occasionally allow the wire to untwist if necessary. The machine itself, not counting the blades or the tail, weighs 160 pounds. 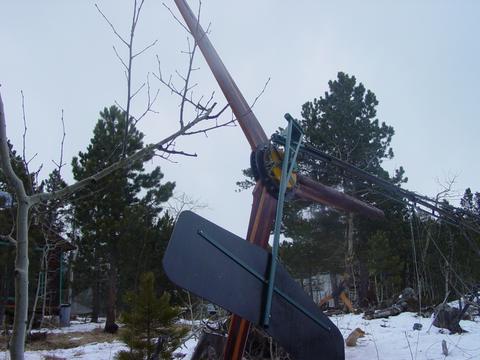 Pictured above we have it completely assembled and ready to go on the end of the tower. 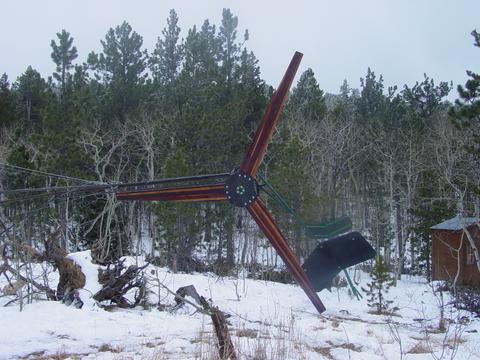 There's another picture of it before we raised it. We balanced the blades in this position. To balance the blades we simply let it turn so the heavy part comes to the bottom (6 O'clock). Then we lift the heavy side up to the 3 O'clock (or 9 O'clock) position and add weight opposite it, until it seems to be balanced. These blades came out almost perfectly, we added about 8 Oz to one side of the hub. Lead makes nice stuff for balancing - wood screws go right through it. Scott brought me up some lead 'decoy' weights (used for weighting down duck decoys) - they are perfect for the job and available at sporting goods stores. 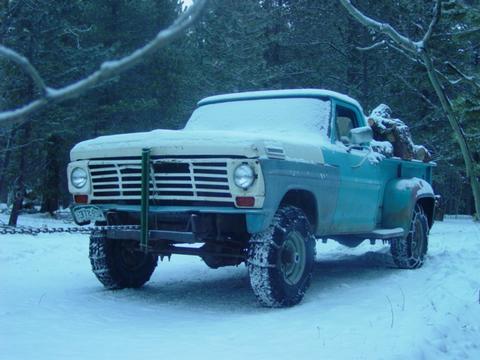 My tower is 60' high, I raise and lower it with my truck. It's much heavier now than it used to be with my old 14' machine, not only is the machine heavier - but I added probably 150 pounds to the tower itself to strengthen it. On top of that, we had 10" of snow. My only chance at pulling it up was to chain up all 4 tires and fill the truck with wood. Once I did that, it was no problem. The first step before I raised the machine was to raise just the tower and make sure it worked OK. Then I raised the tower with just the alternator to see if it would handle the weight (so I wouldn't chance breaking the blades). Once both those things went well, we raised the machine with no problems. 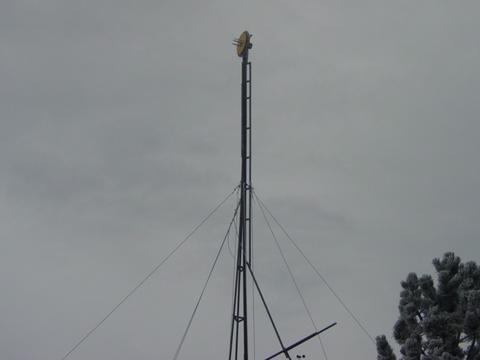 There's a picture of just the alternator on the tower top. 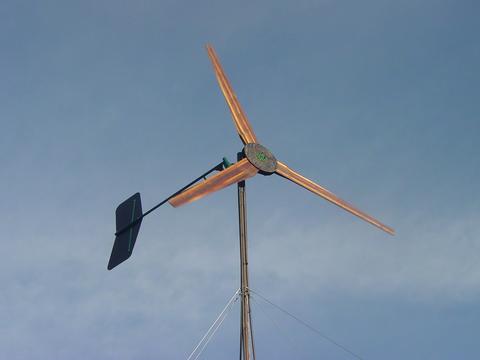 That's how it looks up on the tower! 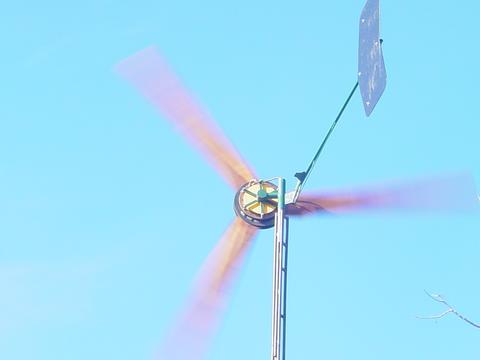 Here's a picture from the back side I took on a windy day. I played with my camera to make the blades look like they're running perhaps a bit faster than they really are. 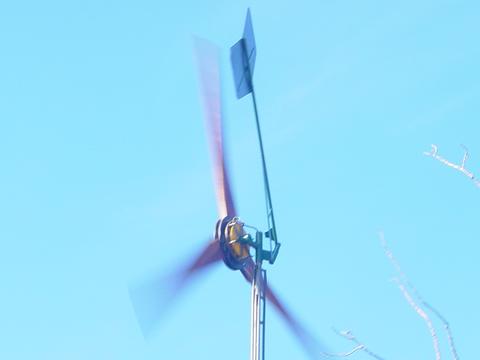 Here it is pictured all furled up in a very high wind. So far it's withstood winds over 60mph a few times with no problems.

So far the machine works quite well. It has such a huge swept area compared to our previous machines that it seems to start up in practically no wind, and it's making a little power by the time the anemometer says 5 mph. At 10 mph it's doing around 400 watts and at 16 mph it's up around 1.5KW. Above that I believe the blades are overpowered a bit by the alternator. I do see 2KW from it frequently and I've seen about 3800 watts from it a couple times in very high winds, but overall I believe the blades are held back a bit in higher winds by the alternator. I can improve it by adding a bit of resistance to the line - this would allow it to speed up in higher winds and the blades would run more efficiently - but as it is it seems very slow and peaceful, and it rarely goes over 200 rpm It's producing quite a bit more power than I can really use. So I'll leave it as it is, it's quite a good low wind machine I think. Time will tell how it holds together! It has been fun, the whole project took 3 weeks from start to finish, I had some friends and neighbors (all of which have their own homebrew wind turbines) helping along the way which was wonderful.