This page is a diary about making the blades for the wind turbine shown above. The goal here is a 15' diameter wind turbine. Click Here to visit the page about the construction of this, and other similar machines. 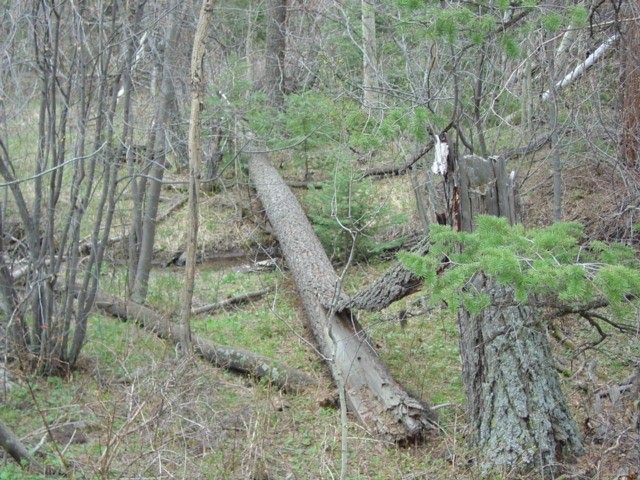 We decided to work build these from scratch, partially because large boards are expensive, and partly because we thought it would be fun. Pictured above is a large (by our standards) Douglas Fir tree that I've had my eye on for a couple years now. It's about 50 yards off the road, down in a creek bed. I believe it blew down about 4 years ago. 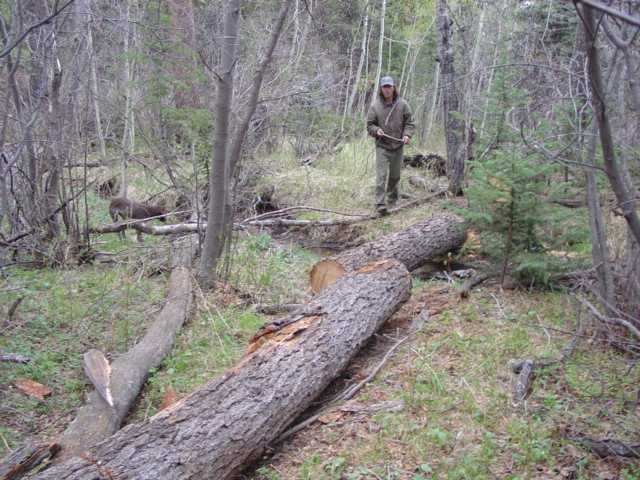 The first step was to cut it into 10' long sections. Although we didn't see many knots at this point, I figured there might be some. I could also see some rot just under the bark, so I figured we'd do well to have them a little longer so we could pick the best part of the boards. We used Matts old Power Wagon to drag the trees up to the road. Lots of old stuff around up here that just barely works! Her name is 'Dode', it'll go anywhere if your patient enough! (I barely was) Click Here to see how she goes right into the creek! The tree was about 1 mile from our old Sawmill, which sits right under Ward's Wind turbine, which is still up and running! The Sawmill is the remains of an old Bellsaw which has been working up here since the 1930's. It's been simplified and rebuilt to a large degree, the only origional parts are parts of the carriage, the track, and the blade. The feed is by hand, we turn a crank which pulls the carriage past the blade. The power is an old tractor which is now stationary.. it's been rolled twice. It runs well though, and the blade is powered off the PTO. Above is pictured the mill running, making the first cut for Matt's windmill blades. The boards came out nicely, they were 11.5" wide, 3.25" thick and 10' long. Quite heavy - there will be lots of wood chips on the floor before we have windmill blades! 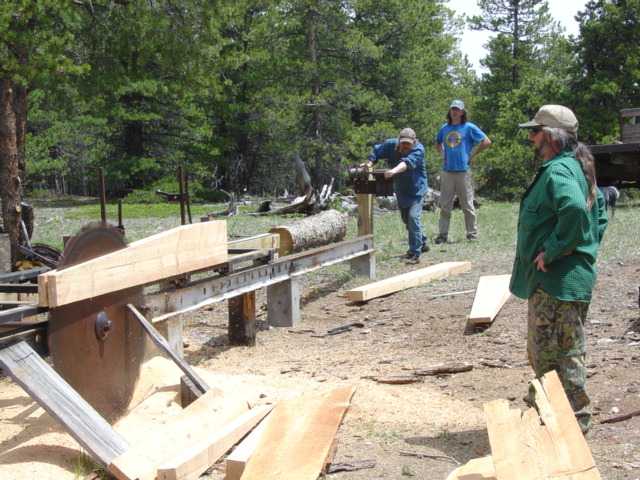 We took the boards back to my shop, and layed out the blades on all 4. Then we selected the best 3, and brought them back to the sawmill to remove whatever material we could. We cut the taper for the proper chord width, and then took a wedge off the back so that we were about 1.25" thick at the tips and full board thickness at the root. Kind of tricky clamping these in the mill at an angle, but once we got it figured out it did a beautiful job! Normally I do this on a bandsaw, but my bandsaw is nowhere near big enough for these. The blades are 6" wide at the tip, and 11.25" wide at the root. In the end, at the thickest point of the airfoil, they'll be 1/8" as thick as they are wide although we increase that ratio a little bit towards the root for the sake of keeping them a bit stronger. 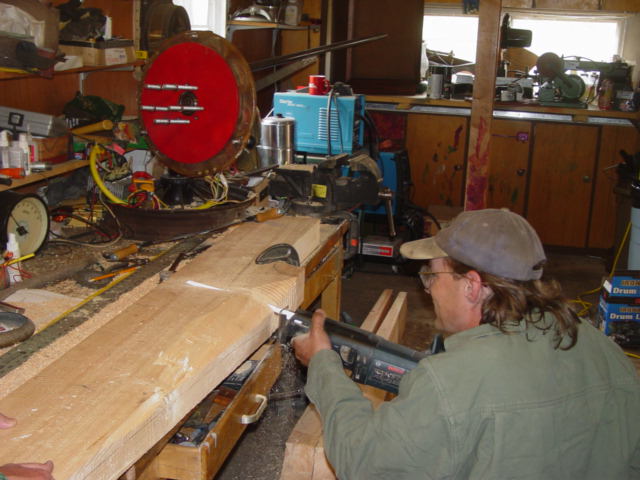 Pictured above Matt's curfing the blades with a sawzall. This goes very quickly - we only do it near the root. Once a lot of slots get cut, we knock out the chips with a chizel. I think it's called a 'lancelot'... a wicked tool, possibly the most dangerous power tool I've ever used. Once used to it though, it does a nice job of removing wood quickly and precisely. It's useful down at the root of the blade. We did a lot with the power planer. I think we made over 50 pounds of chips this way! It works nicely especially on knotty wood. These boards have quite a few small knots especially towards the trailing edge. I tried to lay them out so that there would be no knots at the thickest part of the blade. We used a finishing sander to smooth things out. This orbital sander does a nice fast job. Here's one way to stress test the blades! They all seem very strong, if not a bit heavy... we'll see what happens! Here are all 3 blades finished up! They came out pretty nicely.. at least, in appearance! Time will tell how they actually work. A 15' blade set is much too large to assemble in my small shop. We had to layout each side of the hub seperately, and drill those out. Once the hub parts (basicly disks of 3/4" plywood) were drilled out, we marked where the holes would be in the blades, and drilled out each blade individually. All the holes came out nice and square and on location. In this picture we have the front hub screwed down and were preparing to put the back hub on. It all fit quite well. We painted the hub disks, and finished the blades in linseed oil before assembly. And there we have it! All finished up. It seems rather large compared to the ten foot blades behind it! It was about 3 days from log to finished blade set. The whole set, assembled weighs about 50 pounds, a bit heavy... it makes me wonder if the bearing in the alternator is up to it! Time will tell I suppose. On my 14' machine which I built about 6 months ago, I used normal 2X10 lumber, the blades weighed about 30 pounds. It works fine and has no startup problems, so I suspect perhaps we're a bit heavier than we need to be.